Zimbabwe could effectively wave goodbye to its last department store, which also happened to be its first, after Meikles Limited, a Zimbabwe Stock Exchange company, shut the doors on Barbours Department store as working capital constraints continue to weigh down operations. 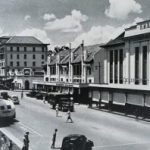 Barbour’s Department Store, situated at the centre of Harare’s central business district, closed doors early June for renovations which well-placed sources say could transform the way the iconic store has been operating for the past 90 years

Meikles has been facing financial challenges of late, mostly around the MS unit, which comprises of the Meikles Mega Market, Barbour’s Department Store and the M Stores. These challenges have been concentrated around procurement constraints, which worsened when Zimbabwe started experiencing foreign currency shortages. The group has also suffered from bad management practices and inability to adapt to prevailing market trends by continuous use of an outdated 1970s model.

Well-placed sources told Business Times that the Meikles was re-looking at its portfolio of stores away from the TM/Pick n Pay Supermarket chain. “Barbour’s closed for renovations but there is a possibility that the store space could be transformed completely. Overall, Meikles is evaluating its portfolio as seen by the closure of several MMM stores.”

However, for management, all the problems facing the group particularly MS, stem from Government’s failure to repay a 20-year old debt as the two parties continue to disagree on an interest rate to use.  The units falling under the Meikles ambit, such as the hotels, TM/Pick n Pay Supermarket chain and Tanganda continue to perform profitably.

A well-placed source said the delays in settling the debt has resulted in the group turning to borrowings but failure to effectively manage its stores, has seen most of these borrowings turning bad. As a result, the group is facing multiple lawsuits and some of its property has been attached by creditors and suppliers.

The group’s total current liabilities for the period to September 30, 2017 were sitting at $159 million from $154 million while total assets for the group were up at $290 million during the period under review from $282 million.

Despite the increase in current liabilities during the period, the group managed to lower its borrowings to $50 million from $56 million of the comparative period.

HM Barbour, A history of the iconic Harare landmark

Barbour’s was a department store founded by Irishman H.M. Barbour in 1917. It was the first department store in then Salisbury. The store started off as single storey building but with time two storeys were added to it, to cater for the different needs of a growing Salisbury economy. Other department stores to grace the Salisbury landscape include Saunders which opened circa 1930s and the Store Bros, which the Meikles family went on to buy but later closed it.

The challenges hitting the group have precipitated a massive staff exodus, which saw top management at Meikles Mega Market throwing in the towel for greener pastures. Among the notable departures are; Stores chief executive Phillip Else, general manager Panganai Ngorima (who has since started his own venture called Food Discount Centre) and chief finance Lana Shelton. Another notable departure is Cosmas Kahari who has been in charge of operations at MMM.

The Business Times is informed that majority of the departed staff have not been paid their outstanding payouts and are considering suing the group.

Meikles Limited is also said to be in arrears with regards to pension remittances which were supposed to be done to Old Mutual Zimbabwe, a situation which infuriated some senior managers thereby forcing their exit.

The source added that it will be difficult to completely close Meikles Stores because the group’s properties and loans are under the retail unit and closing the SBUs completely will have devastating effects.

Ballot to be transported by printers, not military

Emerging risks for tourism and hospitality stocks on the ZSE