Ecobank Transnational Incorporated (ETI) is targeting a return on equity of over 20% in the short term for its Central, Eastern and Southern African (CESA) banking segment and is overall satisfied with the performance and growth trajectory at its Zimbabwe unit.

This come’s as Ecobank Zimbabwe is the current reporting season’s standout performer in terms of key ratios after its customer deposits doubled to US$800m in the year to December 2018 and net profit after tax rose 80% to US$40m.

ETI chief executive Ade Ayeyemi told Business Times on the sidelines of the group’s annual general meeting held at the bank’s headquarters in Lome, Togo last week that performance of CESA, which comprises of 18 countries including Zimbabwe, had demonstrated growth. “The growth within that region while it seems slow is actually improving from 2016.”

In CESA, the group said while it lacked scale and generated returns below the cost of capital, it had decided to operate with the minimum viable presence what would allow for efficiency and be value accretive. In line with this objective, the group had instituted a cost-saving programme, which saw the closure of 86 non-viable branches and increased focus on the technology platform. “These actions led to an increase in the regions ROE to 13.5% in 2018 from 2.3% in 2016.”

Specifically for Zimbabwe, Ayeyemi said local unit continues to perform well, a position which the group is satisfied with and hopes that it will be able to play its part in the objective of making the CESA region a material contributor to the business.

Ecobank Zimbabwe net interest income amounted to US$49.3m from US$34.6m in 2017, an increase of 42%. Total operating income was up 48% to US$80.4m. Deposits doubled to US$896.18m from US$469.56m. Ecobank may find favour with depositors especially with corporates because of its regional presence which they perceive that it gives the bank a solid footing. Evidently, the breakdown of their deposits shows concentration of mainly corporates than retail clients. Treasury activities such as trade financing will be an important component of their non-interest income relative to other institutions. 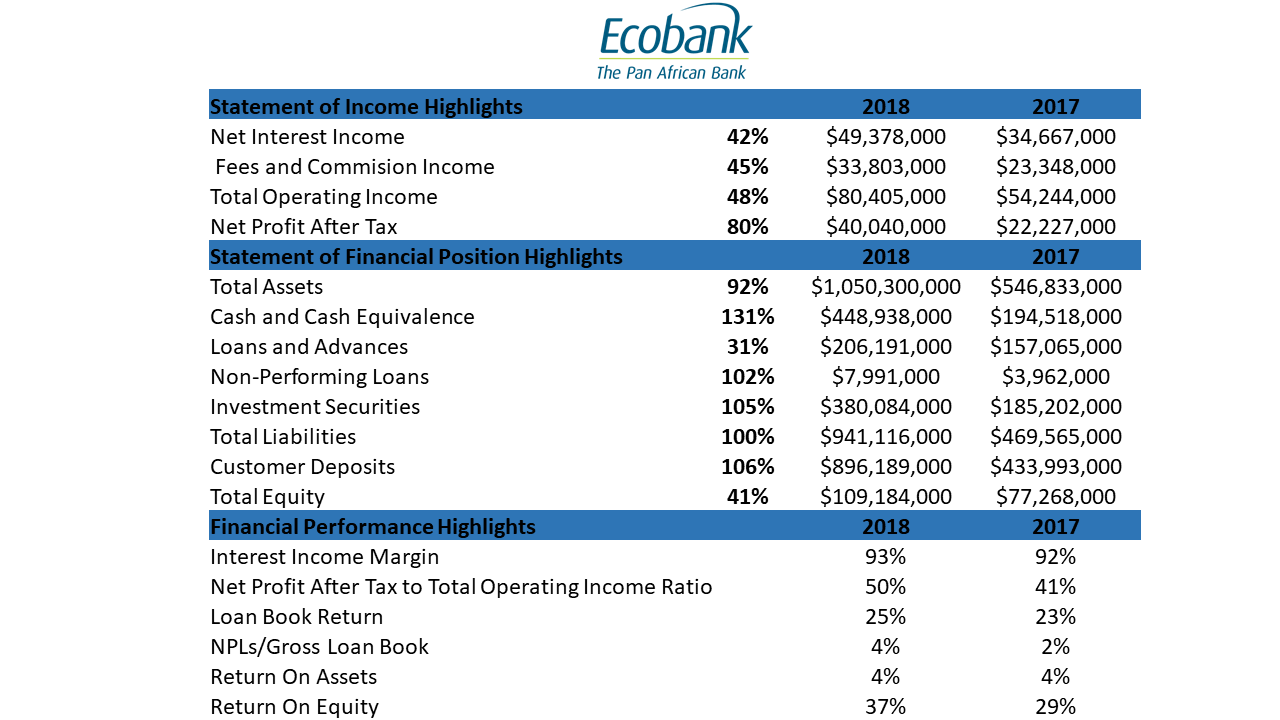 Going forward, continued focus will be on improving efficiency of the bank, improving its digital banking offering as well as leverage on its pan African network to promote trade activities.

Ayeyami said in spite of the monetary dislocation prevalent in Zimbabwe, especially now with the current interest rate regime, the bank continued to participate in the market, be it through trade and imports. Ecobank was last year facilitating fuel payments for Zimbabwe as the country continues to go through a foreign currency crisis.

Overall, ETI appears to be out of the woods with group chairman Emmanuel Ikazoboh noting that the group had gone through seven consecutive quarters of profitability. Profit for the group stood at US$322m up 77% from US$182m in the comparable year ago period. Earnings were 47% ahead of 2017 at 1.06US cents. Return on tangible shareholders equity was at 21% from 13.6% in 2017.

Why Start-up Founders need to network